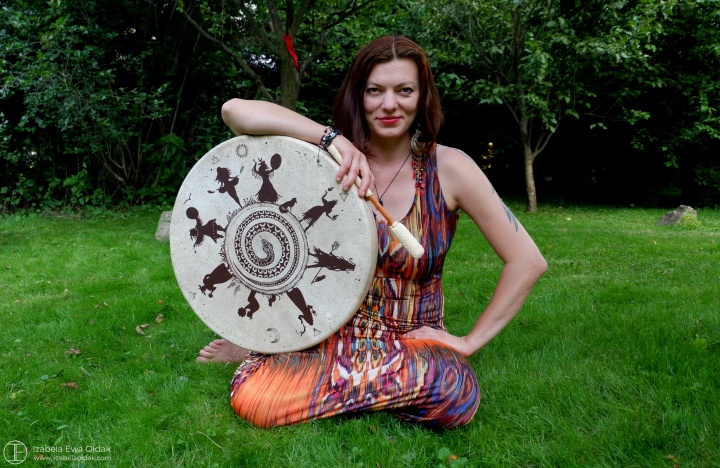 This post will be about drums. As you know I am journeying with the drum to travel to all the three world, I also paint the surfaces of the drums for the others.
Looking from the Siberian perspective the drum is the most important part of the shaman’s equipment, it should also be included in every family, even if no one of them is a shaman. The drum is not an object, but a living creature, mount and closest helper of the shaman. Revitalizing the drum is a separate ritual. During this rite, sacrifices were made and feasts were shared. Each participant beat the drum for at least a quarter of an hour, at the end it was done by the shaman falling into a long trance by recreating the motives of hunting for the animal from which the drum was made. In some tribes, the drum was blessed with vodka or blood. In the end the drawings were applied to it. These were the signs and symbols that most often represented the tripod of the world, or only the lower and upper world to which the shaman enters during the shamanic state. They add also signs related to the family from which the shaman originated.
Hitting individual drawings brought specific results, e.g. hitting the upper part the shaman invoked power. The symbol of the cross often symbolizes the four sides of the world or the “navel of the world”, showing that the shaman performs rites in the middle of all things. The center is the point where the lines of power converge, because the ritual is the meeting place of opposing powers, thus necessarily becoming the center of the world. The inner side of the drum was also decorated. In this zone, you can often find images of the shaman, his family and animals who protect them. The drum handle often had a carved image of the host-spirit of the guardian drum (long-dead shaman’s ancestor) and snakes. Ornaments, metal rings and symbols representing various functions were also hung on it.
Also important is the drumstick, often made of reindeer or deer antlers, with skin stretched into one part of it. The flat part of the stick was richly decorated, sometimes even metal rings were attached so that the playing was always accompanied. Some shamans have one stick to enter the upper world and another to descend into the lower world. If the shaman’s drum was a horse, the stick was a whip to rush it. The drumsticks had also magical powers and were used for divination. The result depended on which side the stick will fall.

Drums I offer you can find here.
Previous
Next
Shop 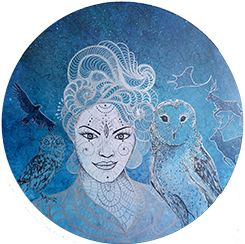